Thank you! Your submission has been received!
Oops! Something went wrong while submitting the form.

Thank you! Your submission has been received!
Oops! Something went wrong while submitting the form.

Bushfire management across our vast State needs a strong, collective approach so we can grow our capability to ensure a safer WA.

Managing bushfire across our State is a huge task, so we’ve established the Bushfire Centre of Excellence to help to make our communities safer.

The Bushfire Centre of Excellence is an education hub where bushfire management personnel can come together for training and learning. Our dedicated team is also examining bushfire knowledge, research and the traditional fire practices of Aboriginal Australians.

The Centre is the first of its kind in Australia and located in the Shire of Murray’s Peel Business Park, about an hour south of Perth. Plans for a Bushfire Centre of Excellence in WA began after the Special Inquiry into the January 2016 Waroona Fire (Ferguson Report). The report recommended the WA State Government create a rural fire function (Rural Fire Division) to enhance the capability for rural fire management and bushfire risk management. It also recommended that this function would establish a Centre for fire management.

Following the announcement, DFES consulted with more than 200 stakeholders through workshops, presentations and forums. This informed the Bushfire Centre of Excellence’s key functions, service delivery and guiding principles.

In March 2019, the Shire of Murray was selected as the preferred Centre location. The decision was made following an extensive Request for Proposal process where local governments across the State could formally express their interest. The Bushfire Centre of Excellence has four key functions designed to serve the bushfire sector. These functions are also designed to strengthen the ways we build and share skills and information to reduce bushfires and their impacts.

The Bushfire Centre of Excellence was purpose-built in 2020. It features training rooms and outdoor training spaces, meeting rooms and more. Aboriginal themes have been carefully incorporated into the building’s design, artwork and interpretive information and the landscaping reflects Indigenous and local heritage, local vegetation and fire design guidelines.

Take a virtual walk-through of the facility using our 3D tour. For information about how to navigate the tour, see the ‘Help’ button in the bottom right corner of the video. To enquire about using the Bushfire Centre of Excellence for a function, training course or other event, contact us today.

The Bushfire Centre of Excellence is committed to gathering traditional and cultural knowledge about fire practices. To achieve this, the Centre has established a Cultural Fire Program which is considering how we can better link contemporary fire management with traditional fire practices.

The Cultural Fire Program will:

Across WA, a mixture of traditional and contemporary practices are being used with great success. The intent of the Cultural Fire Program is to support the development, implementation, coordination and promotion of both existing and future programs. 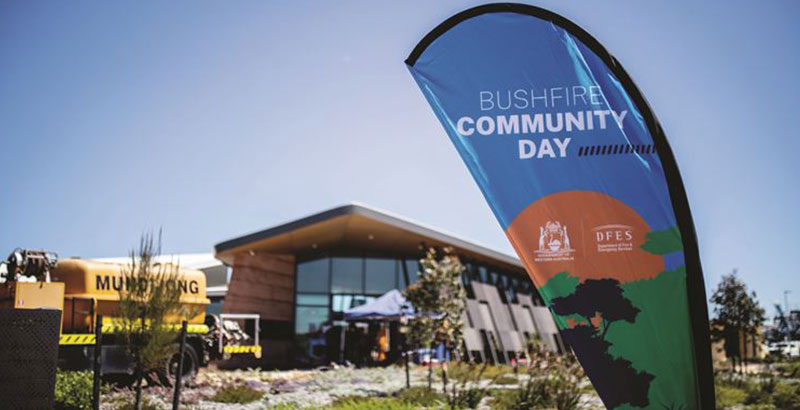 Over 500 people turned out to the Department of Fire and Emergency Services’ (DFES) 2021 Bushfire Community Day at the Bushfire Centre of Excellence on Saturday 30 October.

A volunteer instrumental in establishing a new bushfire brigade and recruiting more than 20 firefighters in just eight months has been recognised at the 2020 WA Firefighting Awards. Read the full release.

The Bushfire Centre of Excellence is open Monday to Friday from 8am to 4pm. If you have a question contact us on (08) 9540 7100 or email BushfireCoE@dfes.wa.gov.au.

Find out if your property is located in a bushfire prone area and view the planning requirements.

A Total Fire Ban is declared when a fire is likely to spread rapidly.

The process of planning and applying fire to a predetermined area.

Bushfire risk when you live in a rural or farming area.

Support for at risk communities

To survive a bushfire you must be prepared to make your own decisions.

Prepare for a bushfire

Having a bushfire plan in place will help you make better decisions.

If a bushfire has started, then you need to monitor official warnings.

Recovering from a bushfire

In the wake of a bushfire, it can be incredibly daunting to return home.